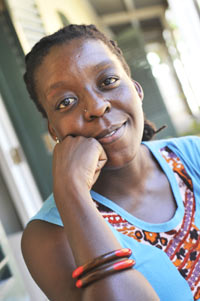 "I was seriously considering boycotting the awards," she says. "I saw that out of all the nominees in all the categories, I was the only black African on the programme. I have a problem with this, as there are many talented black Africans in this country who have been working in theatre far longer than I have."

In the end, Kabwe accepted the award for her performance in the local production of US playwright Dael Orlandersmith's Yellowman, co-starring David Johnson and directed by Lara Bye. The title refers to a derogatory label hurled at lighter-skinned African-Americans by those with darker skins.

An emotionally charged two-hander, Yellowman tells the story of the relationship between the light-skinned Eugene and the dark-skinned Alma, exploring the different shades of racism and the complexities of internalised prejudice.

"Although some audiences couldn't relate to the theme, there are many aspects of the play that are universal, like surviving a dysfunctional family, love and body issues," Kabwe explains. She wore a "fat suit" to portray Alma, a character much larger than her player.

As a lecturer, Kabwe has also had the opportunity to try her hand at directing, but is open to her career path in the future.