The UCT Remember And Give (RAG) programme, which raises funds for the Students' Health and Welfare Centres Organisation (SHAWCO), is getting bigger and better.

With only six of the fund-raising events for the year under the belt, RAG has already raised about R1 million, close to their 2009 target of R1.5 million. They have seven more events lined up. 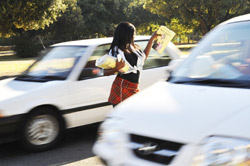 The main money-spinners were Sax Appeal magazine (R723 628), of which 35 000 copies were sold on Sax Appeal Day; ticket sales of R174 000 from the Big Bash, which featured four bands, including the popular Goldfish; O-Week (R109 000), which saw about 500 day students being entertained on a train trip to Muizenberg, a visit to Mzoli's Butchery in Gugulethu, ice-skating at GrandWest Casino and a Peninsula tour, among other activities; and the December 2008 sales of Graduation Wine, which brought in about R60 000.

Cameron Arendse, RAG 2008/9 chairperson attributed the success to a focused and "incredible" committee, "who meticulously planned the projects", and an increase in the quality of the events.

Compared to last year, Arendse said, they are following a similar curve, but have added two extra events that should push their income higher.

These are the Dance Off, which used to be part of the Fashion Week; and the Launch Your Band project, formerly part of the Kirstenbosch Summer Concerts. Last year, RAG raised R1.3 million.

Read more about SHAWCO and RAG.