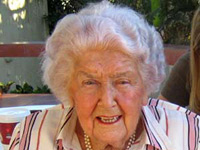 Noël Robb, a Black Sash stalwart and widow of former chair of Council, the late Frank Rob, died in Cape Town last week. She was 95.

Vice-Chancellor Dr Max Price has extended the university's sincerest condolences to the family.

Robb was instrumental in planning the first public meeting of the organisation which became the Black Sash. On many occasions she was chair of the Black Sash's Cape Western Regional Council and was elected Honorary National Vice-President in 1989.

Her involvement in the organisation spanned 50 years during which time she campaigned vigorously against the Group Areas Act, pass laws, and Bantu education.

Robb was born in Plymouth. Because her father served in the Royal Navy, the family moved several times and she was educated by a series of governesses. Though she had only a few years of formal education, she earned a BSc degree from London University.

When she came to South Africa in 1936 she taught maths and science at St Cyprian's School. She married Frank in 1939 and they had five children and 13 grandchildren. In 1973 Robb graduated with a Bachelor of Arts from UCT and was awarded an honorary degree from UCT, a Master of Social Science, in 1994.

Robb religiously attended UCT graduation ceremonies and it was only frailty in her latter years that prevented her from attending more recent events.

Like her husband, Robb was an ardent UCT supporter and benefactor, through the Frank Robb Charitable Trust. The family donated more than R8 million to UCT projects and to the Baxter Theatre Centre.