Younge's iconic sculpture is a link to the "heart of Africa" 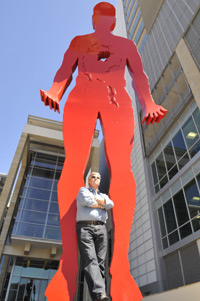 Art of Africa: Prof Gavin Younge with his sculpture Olduvai, unveiled at the launch of the new Convention Towers in the city.

The curved sculpture, which stands 8m tall, resembles the aerofoil shape of a leaf caught in the wind.

The large figurative sculpture was inspired by the 5 000 km-long Rift Valley and the Great Lakes of East Africa, one of the most important prehistoric sites in the world.

"Like the Convention Towers, Olduvai is iconic, contemporary, enigmatic and audacious," Younge commented.

Mike Flax executive director of Madison Property Fund Managers who developed the 16-storey building, said the Convention Towers will be a great asset to Cape Town and the sculpture is a gift to the city.

Zille said the completion of the Convention Towers after three years was an "important occasion in the life of the city".

Reported in the local press, Rashid Toefy CTICC CEO, said the Convention Towers, which is completely solar powered, was the "best address in Cape Town" and that city artworks like Olduvai created dialogue among citizens and tourists.

"With 2010 around the corner, the eyes of the world will be on us. Olduvai represents the link to the heart of Africa."