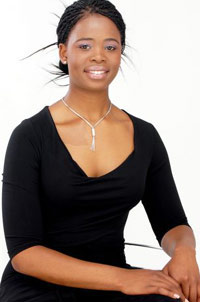 UCT's rising singing star Pretty Yende was a hit at this year's Hertogenbosch International Vocal Competition in the Netherlands, where she won two prizes.

Yende scooped the Prize of the Province of Noord-Brabant, a cash award given to the best opera singer under the age of 24, and the Engagement Opera Riga, which earns her the opportunity to take part in the new year concert at the Riga Opera in Latvia, one of the most renowned opera houses in the world, in December.

"This means I won't be home for either Christmas or the new year," says Yende, with a hint of regret.

Yende was one of 11 singers out of 100 entrants to make it to the finals of the prestigious competition. But she is seizing her opportunities with passion - and the offers are rolling in.

"There are also a few concerts that I have been invited to during the December holidays, and an interest for a recording with the Dutch recording company, so, yes, I have a lot to think about."

Why I choose COVID-19 vaccination based on verifiable evidence UCT’s Prof Thomas Scriba explains the safety profiles of the three available COVID-19 vaccines, and the benefits of receiving it. 25 Jan 2021 Opinion

No vaccination means years of COVID-19-induced death and suffering UCT’s Prof Linda-Gail Bekker and Prof Valerie Mizrahi caution that if only a few people get vaccinated against COVID-19, we will not be able to control the virus. 25 Jan 2021 Republished