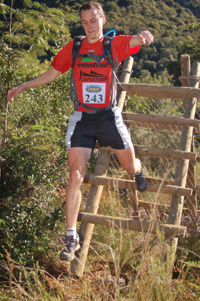 With his win at the Crazy Store Table Mountain Challenge on 13 September, mathematics PhD student Will Robinson has now taken top honours at three big-name trail races on the trot (cheesy punning, we know)

In sweltering conditions, Robinson finished the 35km off-road route around Table Mountain in 3:57:23, around 20 minutes ahead of his nearest competitor.

But don't let that margin deceive - in races like the Puffer and the Hout Bay Challenge, Robinson was virtually unchallenged from the starter's gun. On Table Mountain, however, Montrail/Capestorm teammate Dion Middelkoop gave him a run for his money.

Middelkoop led the race until the start of the third and final 17km leg, when cramps slowed him to a crawl. In fact, Robinson only took the lead in the final hour.

The heat was another unexpected factor.

"The final leg was as difficult, if not more so, than the fourth leg of the Cape Odyssey ultra," said Robinson in Die Burger. "You had to be careful not to overdo it, else you could easily have suffered from heat exhaustion."

The win, Robinson added, was just the fillip he needed going into the Cape Odyssey ultra from 8-12 October, when he and Middelkoop will defend their title against some stiff competition.