VC's installation a celebration, and a vehicle for redress and reflection 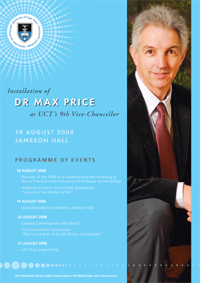 The installation of Dr Max Price on 19 August will be a celebration with a difference.

When Chancellor Graça Machel bestows the Vice-Chancellor's mantle on him, UCT will move from one era to another.

The ceremony is also part of a more extensive programme of events.

The occasion will afford the university a chance to recognise opportunities lost in the past and the painful memories that have remained with many.

One such opportunity came about as a result of the relationship between UCT and Professor Archie Mafeje, a significant African scholar who never "came home" to his alma mater.

"He is an example of significant opportunities lost and I am pleased that the installation week will honour Professor Mafeje as an individual of significance, but also an example of those UCT has been less than fair to in our past," Dr Price said.

During August 1968 the UCT Council approved the appointment of Mafeje, a distinguished alumnus, to a senior lectureship in the Department of Social Anthropology.

But Council rescinded the decision almost as soon as it was made. Though the apartheid government did not prohibit blacks from teaching at white universities, the perceived threat from the regime was sufficient for Council to prevent Mafeje from taking up his position.

Dismayed, a group of students occupied the Bremner Building in a nine-day sit-in, a protest linked to what became known as the Mafeje Affair. Students at the Universities of the Witwatersrand, Rhodes and Natal also joined the protest.

It was the country's first sit-in protest and challenged the "comfortable rituals of formalised protest".

"The sit-in challenged participants and the institution to confront apartheid, and to face what it meant to be a university in apartheid South Africa. For the participants, it was an intense learning experience about apartheid and resistance. It literally changed people's lives. And after the Mafeje Affair, the university itself would never again be quite the same place," former chair of Council Geoff Budlender recalled.

The events of the installation week will unfold in the following order:

A group of alumini who participated in the August 1968 Bremner sit-in will have a symposium reflecting on and assessing the impact of the Mafeje sit-in held in the Senate Room 40 years ago. Attendance is by invitation only.

The Academic Freedom Committee (AFC) and the sit-in reunion participants will host the Mafeje Symposium, Lessons of the Mafeje Affair - 40 years on, at 17h30 for 18h00 in Kramer Lecture Theatre 1.

AFC speakers include Fred Hendricks, Dean of Humanities at Rhodes University; Professor Ken Hughes of UCT's Department of Mathematics and Applied Mathematics; Professor Lungisile Ntsebeza of UCT's Department of Sociology; and Emeritus Professor of Economics, Francis Wilson. This event is open to all and will conclude with the official renaming of the Senate Room to the Archie Mafeje Room and the unveiling of the plaque that will later find a permanent place in the room.

The official installation ceremony is at 18h00 in the Jameson Hall, attended by Chancellor Graça Machel and the new chair of Council Archbishop Njongonkulu Ndungane. Here Dr Price will have an opportunity to share the main aspects of his vision for UCT.

As seating in the hall is limited to invited guests and the format does not allow for feedback and discussion, Dr Price will visit various campuses on the day after his installation (see Campus Conversations below).

During the installation ceremony, UCT will award a posthumous honorary degree to Mafeje, which will be accepted by a member of his family.

The Campus Conversations will take place in various venues. This will be an opportunity for Dr Price to share the outline of his mission with those who could not attend the installation, and to start a discussion about the university's future.

The Vice-Chancellor's Symposium will take place at 17h15 for 17h45 in the Zoology Lecture Theatre on Upper Campus. All are welcome and the theme is: The Future Role of South African Universities: Campus... city... country... continents.

HIV/AIDS-related stigma will be challenged at the Stop Stigma Rally at 13h00 on the Jammie Plaza. This event is open to all and is being organised by HIV/AIDS Co-ordination UCT (HAICU).

"I am linking the event to the installation programme because I believe this is one of the most serious challenges facing our society and it signals my commitment to bringing UCT's energies to bear upon this problem," Dr Price said.

In conclusion, he said: "The installation is an opportunity to refresh our institutional goals, to rethink how we work, to reflect on the broader role and purpose of the university and our individual roles within it, and to generate renewed energy and hope.

"I hope you will participate in the programme."