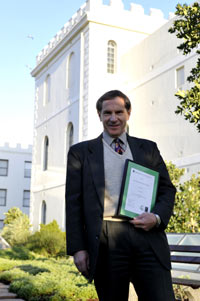 Professor Frank Horwitz, director of UCT's Graduate School of Business, has won the Emerald Literati Network Outstanding Reviewer Award for a second consecutive year. It is the first time that the award has been won by the same person in two successive years.

Horwitz is the editorial board member of three international and two South African journals.

Emerald, based in the UK, is an international publisher of management journals and databases, which currently publishes 190 peer-reviewed journals. The Emerald Literati Network was formed as the Literati Club in 1991, and consists of all authors, editors and editorial board members who have contributed to Emerald journals since that time. This amounts to over 45 000 people from all over the world.

Horwitz received this year's accolade for his contribution as an editorial board member of Corporate Governance - The International Journal of Business and Society. Last year, he won the same award for his article review work on the Journal of European Industrial Training.

Annually, editors of Emerald Publishing's journals nominate outstanding reviewers. Horwitz was selected at the Emerald Literati Network Awards for Excellence 2008 "for his impressive and significant contribution" as a reviewer to Corporate Governance during 2007.

He says he is "delighted and humbled" by his nominations. "These awards are important as they contribute to building the international academic profiles and reputations of active journal reviewers."