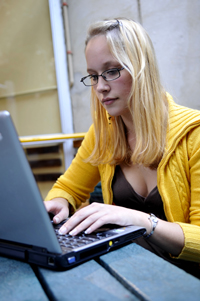 Alexa le Chat, winner of the 2007 Keswick Prize for Lucidity, awarded to a third- or fourth-year student for lucid technical essays.

Le Chat's essay was an analysis of dance musicologies, based on the ballet Nomvula: After the Rain, which used the music of South African rock group Freshlyground. The production was a fusion of various influences, including ballet, contemporary and African dance, and united the city's prominent artists, musicians and choreographers.

"Zoplani Mahola's singing is also a fusion of styles," Le Chat wrote. "The African tradition of scooping to find a pitch rather than hitting the note directly is clearly audible.

"She seems to meander through a melody rather than take the listener directly to the point. Mahola also uses scatting, an influence of American jazz. Another jazz convention is the linking of chorus and refrain passages. Western instrumental arrangement is noticeable in some of their melodies."

Le Chat is the second winner from the School of Dance in the past 10 years. Former winner Kerry van Blerk was also taught by senior lecturer in dance musicology, Daniel Fourie, who submitted Le Chat's essay.

"This is remarkable, considering the size of our school," Fourie said.