UCT's international stature is shining after a University of Pretoria academic's survey ranked the university top among the Southern Hemisphere universities in terms of impact of research into conservation.

"Our universities are often overlooked internationally but are actually very productive in making major research contributions," Cameron said. "I think it helps our students to know that they are working with world-leading researchers."

Cameron, who recently returned to South Africa from the US, is an associate professor and director of the Mammal Research Institute at Pretoria University.

"The h-index is a combination of publications and citations of those publications. It's supposed to represent an index not only of productivity but also of the relevance of the publications". 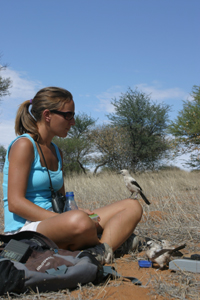 Fourteen of the 36 Southern Hemisphere universities that qualified for the survey had scores equal to the top 40 North American institutions. Of these, 10 were Australian, one from New Zealand, and three South African (UCT ranked first, Nelson Mandela Metropolitan University 10th and Pretoria 13th).

"Of course, in SA - although not in New Zealand or Australia - our research productivity is linked to National Research Foundation subsidies, so that is another benefit.

"We generally work with less funding than in the US, so I think our productivity is even more phenomenal."

"The fact that students are required to produce a paper suitable for publication rather than a dissertation from their independent research project doubtless contributes to UCT's international success in the conservation field."