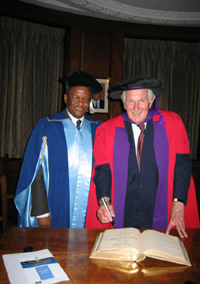 Capped: Prof Njabulo S Ndebele with Lord Wolfson, who received an honorary degree from UCT at a ceremony in London.

Vice-Chancellor and Principal, Professor Njabulo S Ndebele, conferred the honorary degree of Doctor of Science on Lord Wolfson of Marylebone at a special ceremony at South Africa House in London on Wednesday, 14 May.

Dr Stuart Saunders, former vice-chancellor and President of Convocation at UCT, acted as orator for the day and paid tribute to Lord Wolfson's acumen and generosity of spirit. Saunders talked of the major contributions that Wolfson had, made to many universities and, in particular, to UCT, through the Wolfson Foundation.

For example the foundation has supported the Wolfson Computer Labs, UCT Libraries, the Wolfson Pavilion that sits at the centre of the Institute for Infectious Disease and Molecular Medicine, and more recently the refurbishment of the chemistry laboratories in the PD Hahn Building.