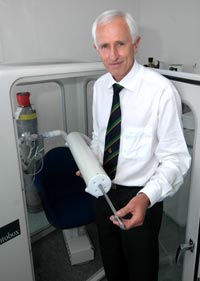 UCT's Professor of Respiratory Medicine, Eric Bateman, has been appointed chairperson of the Global Initiative for Asthma (GINA), becoming the first person from a developing country to lead the group.

GINA works with health-care professionals and public health officials around the world to reduce asthma prevalence, morbidity and mortality.

Bateman, the founder of UCT's Lung Institute and head of the Division of Pulmonology in the Department of Medicine, has been involved in GINA for the last six years, four years serving as chair of the 96 country-member body's science committee, which develops evidence-based guidelines for treatment of the condition.

"It's nice that we (developing countries) have made it to leadership positions in asthma care in the world," he said. He added that he was enthusiastic about the work and wanted to see improved care for asthma patients around the world in his four-year term.