Graduation week stepped up a gear as both the Faculty of Science and the Faculty of Health Sciences hosted ceremonies on Monday afternoon and evening. 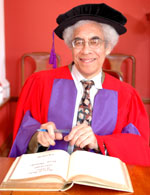 UCT awarded two honorary doctorates over the two ceremonies - the first to earth scientist Professor George Philander (left), who receives a Doctor of Science, the second to Burmese activist and Nobel Laureate Aung San Suu Kyi, who was awarded a Doctor of Laws. Archbishop Emeritus Desmond Tutu, by his own admission loathe to receive awards on others' behalf, made an exception in the case of Suu Kyi, currently under house arrest in Burma.

In his address, Tutu sang the praises of the "petite" Suu Kyi, who continues her decades-long struggle for democracy in her junta-ruled home nation. Drawing comparisons with the struggle against apartheid, he called for continued international pressure on Burma's military regime.

While Philander and Suu Kyi may have hogged the limelight, there were other highlights over the Monday ceremonies. Firstly, Professor Cesareo Dominguez of the Department of Physics, Professor Tim Crowe of the Percy FitzPatrick Institute of African Ornithology and Professor Heather Zar of the Division of Paediatric Medicine were all welcomed as fellows of the university.

Dr Ivan Joubert of the Department of Anaesthesia also received his Distinguished Teacher Award - and some enthusiastic applause - at the Health Science ceremony.

And, of course, there were the hundreds of graduating students who were capped over the two ceremonies. That included the first class to have completed UCT's revamped MBChB curriculum.