Opera stars to shine in Manon 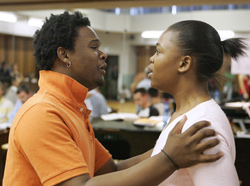 Love hurts: Given Nkosi and Pretty Yende sing the lead roles in Manon, on at the Artscape from 1 November.

Up-and-coming opera singers Pretty Yende and Given Nkosi have already come a long way in their short careers. With classic opera such as Britten's A Midsummer Night's Dream and Mozart's Cosi fan tutte under their belts, they are more than prepared to take on their next challenge: Manon by Jules Massenet.

Soprano Yende will play the title role and tenor Nkosi the role of Le Chevalier des Grieux in a new production of the five act opÃ©ra comique. Presented by Cape Town Opera in collaboration with the UCT Opera School and Artscape, Manon's five-performance run begins on 1 November, with the final show on 10 November.

Still only in their early 20s, Yende and Nkosi have already traveled around the world to showcase their talents. In February, Yende, a UCT student, landed the role of La Musica for the special birthday performance of Monteverdi's opera L'Orfeo in Mantua, Italy, 400 years to the day after its opening in 1607. Nkosi, who graduates this year, is a two-time winner of the National Championship of Tirisano School Choir Competition.

Set in 19th century France, Manon tells the story of a carefree material girl who runs away to Paris on a quest for love and luxury.