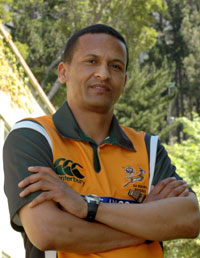 Jerome "JC" Fortuin of the Schools Development Unit has won the Western Province Referee Society's Referee of the Year for the third successive time.

He began presiding over matches in 1994 and became a panel referee in 1997.

The Rugby World Cup has thrust referees into the spotlight. Think of that forward pass that saw the All Blacks bow out of the competition. Fortuin is philosophical. "They played against weak teams in their group. The forward pass could happen to any ref. They (the All Blacks) started to appeal and stopped playing."

What made him take it up?

"I was fattening up and to keep slim decided to become a ref," the former fullback and flyhalf said.

It's a job that demands impartiality, calmness and decisiveness '“ and a respect for those on and off the field. And you must be able to communicate with all levels of society '“ even the zealots who question your calls.

How does he handle pressure?

"If you're wrong, admit it and get it off your chest (he once shouted at a player to "Shut up!" and it was on national TV). Focus then to do it right next time. If you're right, enjoy the moment." The trickiest rule to interpret is the tackle-to-ruck rule. "When do you decide it becomes a ruck? Everything happens at more than 100km/h."