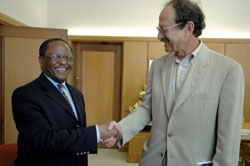 Nobel Prize laureate Dr Harold Varmus has given UCT the thumbs-up, saying the institution was in good hands.

Varmus said the university would continue to get international support, despite changes in leadership at UCT (following the appointment of the new Vice-Chancellor) and in government (with a new president expected to be elected in two years).

Varmus, who received the Nobel Prize for Medicine in 1989 for his involvement in the discovery of cancer genes called oncogenes, was in Cape Town as a chairperson of the scientific research group of the Bill and Melinda Gates Foundation to attend the annual meeting of 44 research groups that try to solve challenges facing global health.

He visited UCT and met with, among others, chancellor Graça Machel, the Vice-Chancellor, Professor Njabulo S Ndebele, the management of certain faculties and students.

"I have warm feelings for the campus," said Varmus. "It is very beautiful and it was nice to see the diverse students. Everyone seems to be happy."