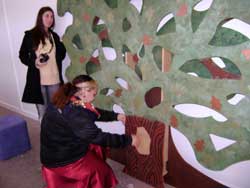 Bringing hope: Students Claudia Ramos and Keelin Pincus put up an artwork they have created for Empilweni.

UCT students have "given life" to abused, sick and poverty-stricken children by making artworks that give voice to their feelings.

On 3 October, some of their works were displayed at Empilweni's annual general meeting in Khayelitsha.

Each year, Empilweni offers therapy and counselling to about 250 children suffering from depression, anxiety, behavioural disorders, rejection and loss issues that are precipitated by sexual abuse, emotional abuse, HIV and AIDS, and poverty. Sandra Prosalendis, board chairperson of Empilweni, said the project was part of the students' social responsibility activity, and aimed to create a welcoming environment for both the counsellors and the children.

"They have created space for the children who are in emotional difficulty, and given voice to their feelings," Prosalendis said.

It had been rewarding and inspiring to do the project, said students Claudia Ramos and Keelin Pincus, who attended the AGM. They added that the idea was to make the children proud of themselves, be confident and love themselves.