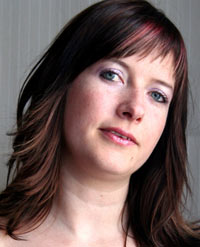 Lauren Beukes, well-known South African author and journalist who has a master's in creative writing from UCT, has won the best columnist category in the Vodacom Journalist of the Year, West Cape Regional Finalists competition.

Beukes, who won for her column in The Big Issue, is now in the running for the national title, which will be announced at an awards ceremony on 4 November at Vodaworld, Midrand, Gauteng.

Reflecting on her nomination, Beukes says, "It's a huge honour and came as a huge surprise, particularly considering the level of talent in the Western Cape."

Other Western Cape entrants selected to go through to the finals included Zapiro of the Sunday Times, Bruce Cameron of Personal Finance, Robyn Smith of etv and Hazel Friedman for Special Assignment. Lauren's submissions include three columns written for The Big Issue in 2006: Life Lessons from Zuma, Think of the Children and Rise of the Princess Slut.

In its seventh year running, the Vodacom award highlights the work of hundreds of journalists and photographers serving the print and electronic media industries. The winner will pocket R100 000.