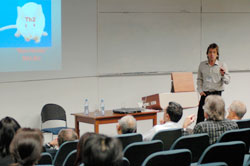 A question of science: Prof Frank Brombacher, designated group leader and programme co-ordinator on immunology and infectious diseases, spoke on Host Protective Mechanisms in Parasitic Disease at the ICGEB symposium on 11 September

It's been an eventful week at the IIDMM, what with President Thabo Mbeki dropping in to open the Cape Town component of the International Centre for Genetic Engineering and Biotechnology (ICGEB) and then a group of top scientists gathering for the centre's inaugural symposium on 11 September.

It brought together researchers from the two ICGEB centres in New Dehli, India, and Trieste, Italy, as well as UCT scientists, to discuss research developments in genetics and chronic diseases, immunology and infectious diseases, and plant biotechnology.

"We came to discuss here research that can be developed at the ICGEB in Cape Town," said Professor Peter Schwartz of the University of Pavia, Italy, who's presentation addressed the essential role of cardiovascular science in developing countries.

At the opening of the symposium Vice-Chancellor and Principal Professor Njabulo S Ndebele said that 'the fact that Africa has been chosen as the home of the third component of the ICGEB is indicative of the increasing importance of African research on the world stage, and the contribution that our own home-grown knowledge and expertise is making in advancing new knowledge".

"The attendance was good," said Professor Iqbal Parker, director designate of the UCT centre. "The younger students found it especially interesting." Parker added that some wanted to know how they could get involved.