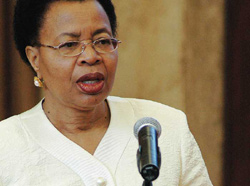 Showing gratitude: Chancellor Graça Machel thanks UCT donors at a function in the Baxter Hall.

Investing in knowledge will put Africa on a new level, says Chancellor.

Chancellor Graça Machel has thanked UCT's loyal donors from greater Cape Town, saying their support and assistance had made the university one of the best institutions in the world.

During a donor recognition lunch at the Baxter Hall on 22 August, Machel said it was strategically important for them to choose to support UCT.

"This puts us on a level where no-one can overlook us as a nation or as a continent."

The event recognised the continued support of leading local individuals, corporate and trust donors, and aimed at further developing and strengthening the ties the institution has with them.

The donors were each handed small gifts as tokens of appreciation for their support.

The former first lady said any country wanting to be continuously successful had to invest in knowledge and research.

"We have some of the best research and we are not only dealing with poverty but how to find a vaccine for HIV/AIDS, a global challenge."

Machel said donors were creating opportunities for young people, who were sometimes discriminated simply because they were from families with fewer resources.

"This country believes in investing in the equality of human beings. Your investment is valued."