Students the toast of Sanlam 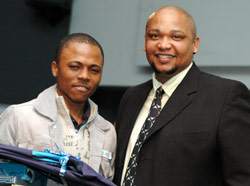 Close on 60 students staggered under the weight of prizes and gifts on offer at the annual Bachelor of Business Science Extended Curriculum Programme (BBusSc ECP) awards ceremony recently.

The pick of the 2006 and 2007 performers on the programme's first-year to honours courses were lauded at the event, hosted at the Bellville head offices of sponsors Sanlam. Sanlam has funded the programme, designed to boost the access of black students to business science studies at UCT, to the tune of R5 million since 2002.

The big winner on the night, though, was second-year student Katleho Mdlalose, who picked up seven awards. These included accolades as top first-year student in 2006 and top student for the first six months of 2007, as well as his 90% score in a first-year maths course.

The occasion also marked a farewell of sorts as students and colleagues sang the praises of programme co-ordinator Ramona Francis, who leaves UCT at the end of the year.

"You've been like a second mother to me," said final-year student Asanda Smith in one of the many tributes paid to Francis. Francis also received a framed collage, made up of photographs of students she's had under her wing over the past few years.