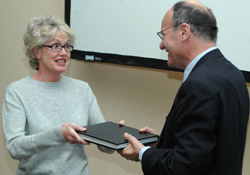 Celebrated: Associate Professor Gay Elisha, Steyn's first PhD graduate and lecturer in the division of medical microbiology, hands Steyn the Festschrift, a book in his honour.

On 28 June Professor Lafras Steyn, head of the division of medical microbiology in the Faculty of Health Sciences, received a Festschrift from the university, marking his immense contribution to the field and to UCT.

Dean Professor Marian Jacobs hosted the tribute and called it a 'celebration of just some of your academic achievements over your academic career'. Family, friends, and colleagues packed the Learning Centre Lecture Theatre in the Anatomy Building to applaud Steyn.

A Festschrift is a book honouring a respected academic. The term, borrowed from German, could be translated as 'celebration publication'.

It contains original contributions by the so-honoured academic's close colleagues, often including their former doctoral students. The essays usually relate to or reflect upon the academic's scholarly field. But they can also include important original research by the individual authors.

Steyn called the Festschrift in his honour 'a tremendous privilege'.