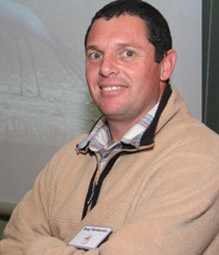 With its publication in 1997, the landmark Southern African Bird Atlas Project (SABAP1) created the biggest biodiversity database in Africa. The sequel project, SABAP2, launched on 28 June in Cape Town, hopes to do much the same.

It will gather updated, finer-scale distribution data through professional and public participation, providing a 'second snapshot' of bird distribution in South Africa, Swaziland and Lesotho.

The project is a partnership between UCT's Avian Demography Unit (Professor Les Underhill is the project leader), BirdLife South Africa and The South African National Biodiversity Institute. Their work will add to our understanding of the distribution and abundance of bird species across the sub-continent.

But it's the 'citizen scientists' that play a large role: the bird clubs, amateur ornithologists and landowners who are the project's eyes and ears. They will record species distribution across more than 2 000 grid cells.

This data provide scientists with insights into how our environment is changing, changes that place huge pressure on birds. And it's birds, that can be 'pulse monitored', that show how and where that change is manifesting.

'They fly. They're quick to respond to changes, providing invaluable warnings and pointers,' said the ADU's James Harrison.