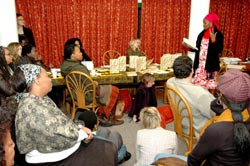 Women's words: Mmatshilo Motsei reads from her new book, The Kanga and the Kangaroo Court, at a meeting at UCT last week.

A while back, Mmatshilo Motsei was writing a love story, researching the dating and romantic traditions of African elders. Then Jacob Zuma was acquitted of rape.

The verdict so angered Motsei that she abandoned her story and started on a new project what would become The Kanga and the Kangaroo Court: Reflections on the Rape Trial of Jacob Zuma, released by David Krut Publishing earlier this year. On 19 June, Motsei talked about and read excerpts from her book at a seminar hosted by UCT's African Gender Institute and the Gender Equity Unit of the University of the Western Cape.

A poet, author and activist, Motsei said the book was inspired by the courage of the complainant in the case, known only as Khwezi, 'who took a principled decision' to lay a charge against Zuma, a father figure and family friend.

While there had been much to be optimistic about after 1994, women's rights had not progressed much over the past decade, said Motsei.

The time had come for women to remobilise, look at what went wrong and find ways to galvanise the issue of women's rights, added Motsei.