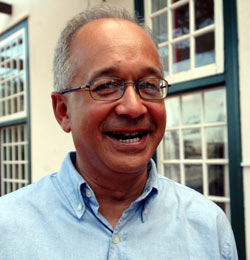 He will receive the award at the June graduation ceremony.

Nasson, who describes himself as a writer of history, not a historian who writes, won his first UCT Book Award in 1993 for Abraham Esau's War: A black South African War in the Cape 1899-1902.

It was a seminal publication, one that dissected an altogether neglected aspect of war and South Africa: the contributions of irregular soldiers and civilians.

In this nomination, Professor Vivian Bickford-Smith wrote of Nasson's book: 'Britannia's Empire is packed with elegant and concise argument, original insights and what can only be described as Nassonian witticisms.'

John Darwin, an eminent scholar of the British Empire, wrote in the UK's Times Literary Supplement: 'The interweaving of social, cultural, political, diplomatic, economic and military history is extraordinarily deft: a huge range of reading is poured into some 200 pages. Much of the pleasure of the book comes from the freshness of the writing, which is crisp, economical and witty ' Readers in search of a short history of the British Empire, comprehensive and bracing, need look no further.'