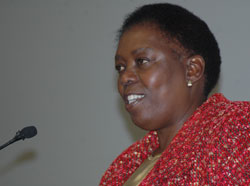 Deputy Minister of Health, Nozizwe Madlala-Routledge, speaking as a guest of UCT's branch of the TAC, highlighted the need for more medical practitioners in the fight against HIV/AIDS.

Welcomed to UCT's medical school on 7 May with chants of 'health is a right', Deputy Minister of Health, Nozizwe Madlala-Routledge, outlined the role that health practitioners will need to play in the government's new national AIDS plan.

Two aims of the five-year national strategic plan to combat HIV/AIDS and other sexually transmitted infections are to halve HIV infections by 2011, and to offer treatment to 80% of people with HIV.

What's needed, though, are skilled health workers, said Madlala-Routledge, speaking as a guest of UCT's branch of the Treatment Action Campaign. One problem is the number of medical personnel moving to private practice or overseas.

There are other challenges.

'Compared to other middle-income countries, South Africa has the highest per capita health expenditure,' Madlala-Routledge said. 'We also have the highest mortality rate. Expenditure is not deployed efficiently. We need sustainable solutions.'