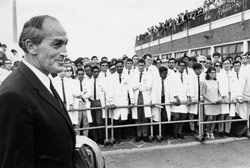 Lasting legacy: UCT Alumnus, Sir Raymond 'Bill' Hoffenberg (left in picture), has died in Oxford, United Kingdom. A memorial service for him will be held on Tuesday, 8 May, at 16h00 in Conference Room 4 in the Barnard Fuller Building.

UCT is sad to report the death of Sir Raymond Hoffenberg (84), the gifted endocrinologist, medical scientist and political activist who was banned by the South African government in 1967.

The banning order made it impossible for the UCT Fellow and alumnus to continue his duties at Groote Schuur Hospital or as a senior lecturer at the medical school, positions he had held with distinction since 1959.

His departure for the United Kingdom was that country's gain. He was appointed William Withering Professor and head of the Department of Medicine at the University of Birmingham, one of the most prestigious chairs in England. From 1983 to 1989 he was president of the Royal College of Physicians. He was awarded a knighthood in 1984 for his contributions to medicine in the UK.

In 1993 UCT conferred on him the degree of Doctor of Science in Medicine honoris causa. Hoffenberg also served on the board of the UCT Trust in the UK, a registered charitable trust raising funds and support for UCT in the UK and Europe.

Vice-Chancellor and Principal, Professor Njabulo S Ndebele has said: 'It is with heavy hearts that we receive the news of Sir Raymond's passing. He was a distinguished alumnus of the university. His ban in our country was a tremendous loss, however, we are indebted to him for his continuous efforts as an activist for South Africa."