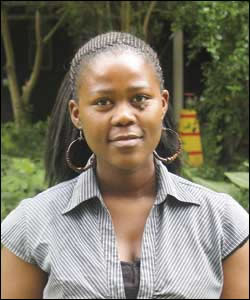 At the onset of her tenure as president of the 2006/2007 Student Representative Council (SRC), final-year BSocSci student Zuki Mqolomba sets out to bring "guaranteed" - it's a word she uses often - service and delivery to her constituency.

"My dad was highly involved in community and student governance at Fort Hare as a political activist," she says. "I suppose it runs in the blood."

The 21-year old has made it her task to rebuild confidence in and to restore the integrity of the SRC on campus.

"The SRC of 2006 worked hard and achieved goals," she says, "but this was overshadowed by internal squabbles and, as a result, three members resigning."

But that's water under the bridge.

"The SRC is not dead. It is essential that the SRC of 2007 puts collective interests before individual interests. It will lift its fists against a bureaucratic system and an elitist institutional culture that oppresses its students and undermines their aspirations, and will work towards bridging the gap between theory and practice."

Issues she wants to tackle during her reign include reducing financial and academic exclusions, a more student-friendly exam timetable, promoting HIV/AIDS awareness and voluntary testing, and negotiating a better Campus Access Guide Plan, which is scheduled to be rolled out in 2009.