UCT buildings a model of style 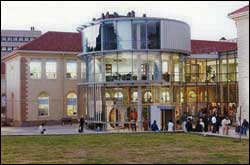 The South African Institute of Architects has conferred Awards of Merit on the architects of two UCT buildings.

The institute named GabriÃ«l Fagan Architects, in association with MLH Architects and Planners, for their work on the Wolfson Pavilion, home to the Institute of Infectious Disease and Molecular Medicine (IIDMM) on the UCT medical campus; and Derick Henstra and Peter Fehrsen of dhk architects, in association with Joshua and Joshua Architects, responsible for the new Chemical Engineering Building, as winners of two of the 25 national merits it awarded this year. There were 33 buildings sent for adjudication from the regional adjudication panels.

"The awards showcase the best we have to offer in South Africa," noted the adjudication panel on the work on offer.

The Wolfson Pavilion derives its name from the Wolfson Foundation, which sponsored R6.4-million towards the building. The award, according to John Wilson-Harris of GabriÃ«l Fagan Architects, is the result of the client (UCT) "getting good guys to do the job".

In short, the IIDMM briefed the architects of the Wolfson Pavilion to link the three buildings of the institute both physically and symbolically, and encourage informal interaction between colleagues to heighten the feeling of community within the institute. Particular emphasis was placed on the retention of the view of Devil's Peak.

"It is a modern building set in a classic environment," says Wilson-Harris.

The new Chemical Engineering Building houses the largest chemical engineering department in South Africa and, according to head of department Professor Eric van Steen, is a demonstration of the principles of chemical, civil, electrical, mechanical and general engineering.

The calibre of architects involved in the building of this six-storey edifice ensured that it has become "a communicative, happy place", says Henstra of dhk Architects. It was designed to "slot into the UCT urban fabric, it is polite to its older surroundings, while maintaining interior modernity infused with natural light and ventilation".

"It is a fine bit of architecture and is a product of sleek, good, sensitive design and a great client who appreciates an open workspace."