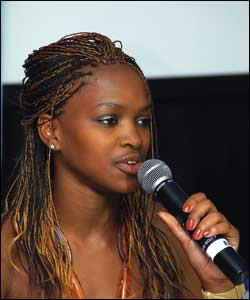 Having it all: BA student Fikile Moeti has been chosen as a finalist for etv's MTV base World Chart Express VJ Search.

For someone on the verge of being catapulted into the realm of superstardom, Fikile 'Fic' Moeti is certainly not letting the hype go to her head.

At just 20, the MTV Base VJ competition hopeful carries herself with the confidence of someone well beyond her age. Currently completing her BA degree in film, media and visual studies at UCT, Moeti has always envisioned herself doing something in the entertainment industry.

"As a matter of fact, I always used to fantasise about presenting a major show on television," she says. "I mean, who hasn't?"

She dreamt of presenting shows like Selimathunzi or Jam Alley, but topping her wish list was a spot on MTV's The Lick.

Now she may just get her shot.

Moeti was one of a thousand young South Africans who auditioned for e.tv's MTV base World Chart Express VJ Search. She's now been chosen as one of four finalists in the competition, the only one from Cape Town.

The winner of the VJ Search will end up as a presenter of season two of MTV base World Chart Express, the music chart show sponsored by Fanta that premieres on etv and MTV base on

With a schedule that includes commuting between Johannesburg and Cape Town, press conferences and public appearances, being in the limelight is proving a little hectic. Moeti is taking it in her stride, however.

'I'm always up for a new challenge," she says. "I've been blessed so far in my life in that I've been able to meet those challenges and come out the other side with my head held high."

Moeti credits her mother as the major force in her life. "She's my rock."

A bigger concern is the proximity of the competition to her final-year exams, but Moeti is determined to have it all.

"Ultimately, a degree is what I came here for and I do intend to finish my studies. It's all about balance, which is something that will come in time."

The four finalists will face off for the title over the first 10 days of November, which will be screened on etv.

Their fate lies in the hands of both a panel of celebrity judges and the viewers, who vote via SMS. Those who want to vote for Moeti, can SMS 'VJ FIKILE' to 34700.