Betrayal at the Baxter 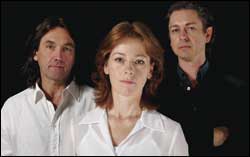 Deceivers and the deceived: (From left) Andrew Buckland, Susan Danford and Jeremy Crutchley star in Betrayal, on at the Baxter from this week.

Deception, dishonesty and infidelity come under the spotlight in Harold Pinter's powerful contemporary classic, Betrayal, at the Baxter Sanlam Studio from to

The 2005 Nobel Literature laureate's compelling masterpiece is a brooding comedy of sexual manners, which examines the high price of passion when an illicit love affair destroys a marriage and sabotages a friendship. Cleverly told backwards, the story unravels a labyrinth of betrayal as the characters in the love triangle take the audience into their tangled emotional world.

Betrayal runs from to at 20h15 nightly, and booking is through Computicket on 083 915 8000 or the Baxter Theatre Centre on For discounted block bookings, charities and special show and dinner packages, call Sharon on ( during office hours.