Sporting stars come out to shine 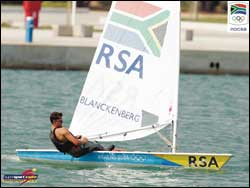 This past Saturday, the Sport and Recreation Department hosted its Annual Sports Awards Dinner.

In the running for the Turpin Cup for service to UCT sport were Alapan Arnad (badminton), Joshua Marc Weinstein (judo), Anthony Hall (mountain and ski and rock climbing), Sarah-Jane Johnson (archery and tennis club outreach project) and Matthew Kemp (men's and women's water polo, and as a rugby referee).

For performance of the year - and the Landstem trophy - nominees were the mountain and ski club for summiting Cerro Tres Picos during their Patagonia expedition, the women's first team squash for winning the SASSU squash tournament for the first time in 15 years, the men's and women's water polo teams for winning their respective SASSU tournaments, Gareth Blanckenberg for sailing (skipper of the winning yacht at the 2006 Lipton Cup), and the fencing men's team for winning SASSU 2006.

Former winners of the Jamison cup, Jenine Ellappen (chess) and Siyoli Lusaseni (squash), were in the running again, going up against James Gordon (fencing), Gareth Blanckenberg (sailing), Oliver Hobson (sailing) and the three women who represented the South African water polo team at the Commonwealth Games, Fiona Mallett, Jade Liddell and Robyn Brooker for Sportsperson of the Year title.

Retiring coaches Pierre le Roux and Charles Stuart were presented with awards in appreciation of their 16 and nine years' involvement with UCT hockey.