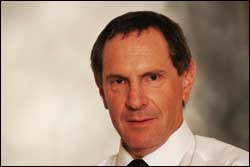 Next cycle:. Prof Frank Horwitz: "Transformation has several facets. One of these is to build our capacity to be financially sustainable. This will help us to attract and retain the talent vital to enhancing our intellectual leadership and building a culture of valuing and celebrating our diversity."

Professor Frank Horwitz has been re-appointed as director of the Graduate School of Business for a further three years. Looking forward to his second term, Horwitz is keen to consolidate the school's achievements but will also concentrate on "building the business of the business school".

Speaking from the Breakwater Campus, Horwitz said: "We will work to further enhance the GSB school's reputation and brand - and lift fundraising efforts to secure more bursaries, needed to improve access to the school's programmes."

A world-renowned human resources specialist, he has been a member of faculty for 20 years. He's lived and worked on four continents and has had stints in Canada, the UK, Singapore and China.

Horwitz says it will be important to continue the strong relationship between the GSB and the Faculty of Commerce, with a new dean coming on board at the beginning of November.

He's particularly gratified to see that the school is becoming increasingly popular among students from other African countries, both on open-enrolment programmes as well as on their executive-education and in-company, corporate-learning programmes.

"We're proud that we have increasing numbers of international students - 17 to 23% of our student body - with the biggest number on the MBA programme. It's important that we're able to attract students from other African countries and further abroad."

Horwitz said the school would also concentrate on international exchange programmes with 25 leading business schools, including institutions in India and China.

But the critical challenge was further enhancing the diversity of the school's staff and student body.

"The majority of students across all our programmes are black, but we need to increase our diversity on particular programmes."

Funding from the Carnegie Corporation of New York is supporting three new senior lectureship posts and Horwitz hopes to have these filled by the end of next year.

"But transformation isn't just a question of employment equity and student targets. As important is the need to transform our institutional culture, attitudes and our workplace climate. During the past three years we've created initiatives to create a workplace where people want to be - and where they feel they're making a contribution."

The school's staff will participate in Khaluma workshops and next year the Centre for Higher Education Development will offer isiXhosa conversation courses for GSB staff. The school is also working through a series of workshops to establish core values that will guide the GSB's vision and shape behaviour.

With business growing on all fronts, the one surprising constraint the school faces is lack of space.

"This certainly reflects the school's growth, but we'll have to address the funding required for expansion of the Breakwater Campus, noting the physical limitations of it as a national monument," Horwitz said.