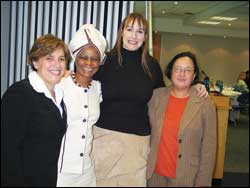 "Women are dying at an unimaginable rate and this in a society with all our resources," Ramphele said. "Sixty-seven per cent of women in KwaZulu-Natal are HIV positive. We are bearing the brunt of public policies."

Ramphele was guest speaker at the UCT Investec Breakfast for Women in Medicine, sharing the podium with Transnet CEO, Maria Ramos.

In addition, women were victims of domestic violence and violent crimes, Ramphele said, urging those women present to use their knowledge and positions in society to become change agents.

"Will the real South African leaders please stand up?" she said to applause. "We [the women] have the resources and the will to tackle the toughest political issues."

Ramphele said South Africa's transition was no miracle. It had taken blood, sweat and tears, and to think otherwise would negate the sacrifice many made for democracy.

"It wouldn't be fair to those people who gave up their lives."

Nonethless, hard work lay ahead and more women were needed in positions of authority.

Ramphele referred to Jim Collins's From Good to Greatness, where he said that to be a level five leader, you needed a blend of extreme personal humility and intense personal will.

Ramos inspired the audience with personal stories from her experiences at Transnet, urging women not to be afraid to ask basic questions in male-dominated environments.