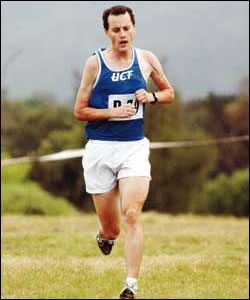 There are parts of the past 12 months that William Robinson would probably like to forget.

Like the incident, just on a year ago, in which he was robbed and stabbed near the Rosebank train station. And the accident in February this year when, shortly after hearing he'd been selected for the South African side to compete in the World University Cycling Championship in Belgium, he crashed badly in a local race. He broke both his arms and cracked some ribs, among other injuries.

But Robinson, a master's student in the Department of Mathematics and Applied Mathematics and a member of UCT's cycling, athletics and mountain and ski clubs, was hardly out of hospital when he started running again, broken arms and all. He brushed aside his injuries and hit the tarmac as if the fall had never happened.

His doctor couldn't have been too pleased, commented athletics coach, James Evans, at one stage.

Seven months later, and Robinson has recovered well. Although his right arm still gives problems - the fractures haven't quite healed properly - and has thrown off his running gait. (So he looks a little lopsided when running, he admits.)

"I'm sure I lost a little bit of rhythm and efficiency, but I've learnt to compensate for that," he says. "Now I don't even think about it."

It shows, too. He's done well in all the races he signed up for since the accident, and has just won his longest of the year, the 80km Peninsula Ultra Fun Run (organisers obviously have a sense of humour) breaking the tape about 40 minutes ahead of the next runner. As if the distance isn't enough to push the participants to their limits - it's but a few clicks shy of the Comrades, remember - more than half of the race takes place off-road, run as it is from Cape Point, over mountains and hills, to the V&A Waterfront.

Robinson's always had a thing for ultra races, though. In 2003, he won the 100km Western Province road running championships, and about two years later he finished second in the Puffer 80. The recent race also means he keeps up his average of about one ultra a year.

But it's all about balance for Robinson.

He's in the running for honours at the Western Province duathlon championship, he plans to return to the local cycling calendar in January 2007, and this weekend he's gone hiking with the Mountain & Ski Club.

He seems to have this fitness thing down pat.