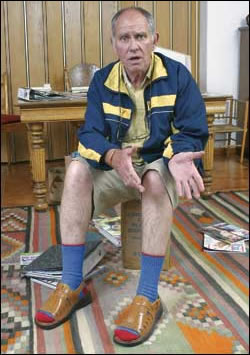 Wilson Dunster is no stranger to Cape Town audiences.

After a break of more than 20 years from performing on local stages, the UCT-trained actor is back at the Baxter Theatre Centre.

Dunster is currently starring with his real-life wife, Elize Cawood, in a quasi-romantic comedy, Art of Charf (Lady Lonely Hearts), written specially for the pair by well-known playwright Paul Slabolepszy.

Dunster and Cawood have been married for 24 years and have two children, Luke and Jenna.

Jenna also has her sights set on becoming an actress.

Johannesburg has become home to the family. And it's not that Wilson has given up acting completely. He has, in fact, been delivering award-winning performances mainly in television and almost 40 movies.

Characters like Diehard in the smash hit movie There's a Zulu on my Stoep and his television roles such as Oom Syd Keyser in Konings and Torings, Spider in Egoli and the first mine manager Pierre de Villiers in Isidingo have made him very popular with many South Africans.

Cape audiences will remember him for stage portrayals which include the lead in CAPAB's Hadrian VII, directed by Roy Sargeant, which opened the former Nico Malan Theatre (now Artscape) in 1971.

Productions like Rosencrantz and Guildenstern are Dead, Twelfth Night, Romeo and Juliet, Glass Menagerie and People are Living There, to mention just a few, followed.

For the Baxter Theatre Centre over the years, he has appeared in memorable productions such as The Cherry Orchard, An Oak Falls, Cat on a Hot Tin Roof, Memoir and Torch Song Trilogy.

After training at UCT's Speech and Drama Department, Dunster received a study grant to observe theatre in England, France, Germany, Italy, Greece and Holland in 1970.

The following year he did a postgraduate course in classical acting at the famous London Academy of Music and Dramatic Art (LAMDA).

In the 70s he worked with South African theatre luminary Athol Fugard in Orestes, Dimetos and Statements after an Arrest under the Immorality Act, all by Fugard and which went on a European tour with Yvonne Bryceland and Ben Kingsley. During this period Dunster also started a long association with Barney Simon and played the lead in Marat/Sade for the opening of the Market Theatre.

His other television appearances range from Onder Engele to The Settlers, Suburban Bliss and Molo Fish. Other films include Rutanga Tapes and Jock of the Bushveld.

Dunster and playwright Slabolepszy both studied drama at UCT and while they have been contemporaries all these years, this is the first time that they are working together in a Paul Slab play. Director Bobby Heaney's son, Peter, and more recently Slabolepszy's daughter, Frances Marek, are also UCT drama graduates.