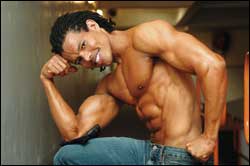 Not too long ago, UCT boasted a troupe of body builders, big enough (in numbers, we mean) to walk the South African Students Sports Union (SASSU) games two years in a row.

Jackson Marakalala was part of the last UCT team to win the title, back in 2004. But now the doctoral student in chemical pathology cuts a lonely figure on the stage, with only he and sometime teammate Sadiq Abubaka flying the UCT flag at competitions.

But Marakalala, a part-time model who has just contested in Mr Fitness SA Pageant, is not letting that stand between him and the medals. In recent weeks he's won the bantam and senior novice categories at the Western Province Ironman Competition, and also finished third at the Western Cape Natural Rose Competition (for those body builders who choose not to use steroids). He also made it into the top five of the recent Muscle-mania event of the International Federation of Body Builders (IFBB), and has done well enough to qualify for the national championships in September.

All this on a three-day training regimen, and maybe cutting down on some foods a few days before competitions.

"I don't believe in suffering," he says. "I do the sport because I enjoy it."

Coach Jeffrey Johnstone believes Marakalala can go far in the discipline. He has lots of strengths - his chest, deltoids, biceps and obliques catch the eye - and with a little more work on the legs can strike the right balance with his upper body.

And then it won't matter much that he's the only UCT person on the stage.

In volume 25 no 15 of Monday Paper, we erroneously indicated that powerlifter Jeffrey Johnstone lifted a total of 662.5kg at the National Powerlifting Championships. We've since been informed that the correct tally was 430kg. We apologise for the error.