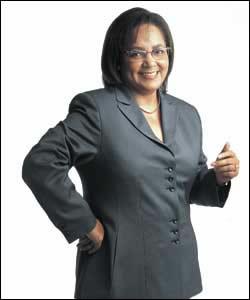 Patricia De Lille: The leader of the Independent Democrats (ID).

The main focus of the event was to celebrate Women's Day and to motivate young people to realise their dreams and fulfill their potential. To introduce the event, a brief docu-drama was screened. The recording showcased a collage of pictures and video footage, zooming in on the transformations that have affected women, how women are viewed in society and comparing the women of today and women of the past.

"Our struggle should not be against men. It should be against inequality," she said.

Referring to the 50th anniversary of the 1956 anti-pass march to the Union Buildings, De Lille said it was the day that had started women's liberation in this country. "Women should be fighting for what they believe in and also what they are entitled to."

She ended her speech with a quote from Margaret Thatcher, who stated: "In politics if you want things said, ask a man. To get things done, ask a woman."

(Formed in 1992, the BLSF represents a transformation milestone at UCT. Its goals are to provide a voice for black students within the faculty. In the past black students felt the law faculty was an alienating environment in which to study, with access difficulties and a lack of academic support. In response, they realised their transformation goals could best be served by joining to form a society.)