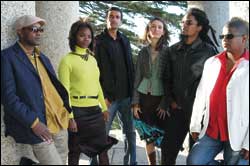 The Vice-Chancellor and Principal, Professor Njabulo S Ndebele, invites members of staff, students and the public to attend the Vice-Chancellor's Open Lecture on Tuesday, August 15, from 12h00 to 13h10 in the Baxter Concert Hall.

Grubbs is one of three recipients of the Nobel Prize in Chemistry for 2005 in recognition of the development of the metathesis catalysts in organic synthesis. These catalysts open new ways to produce chemicals that are essential for modern life in ways that do not cause pollution. The synthesis methods developed by Grubbs are more efficient, simpler to use and environmentally friendlier. It represents a great step forward for "Green Chemistry" by reducing potentially hazardous waste through smarter production.

The UCT Drama Department and Mike van Graan invite you to a public lecture titled From Protest Theatre to the Theatre of Conformity?

The lecture will be held on Wednesday, August 16, at 19h00 in the Arena Theatre, Hiddingh Campus. Please feel free to join the speaker for a drink before the lecture at 18h30.

Playwright Van Graan, who is currently the artist-in-residence with the drama department, is the author of successful plays including Green Man Flashing, Mixed Metaphors and Some Mothers' Sons. The lecture will focus on his work in the context of contemporary South African society and against the backdrop of pre-1994 theatre that focused on anti-apartheid themes.

You are invited to attend the inaugural lecture of Prof George Swingler of the Department of Child and Adolescent Health, Faculty of Health Sciences on Wednesday, August 30, at 17h30. The topic is Experience, inference and Evidence in Clinical Practice: Bathwater Without a Baby? He will speak at the Student Learning Centre lecture theatre, Anatomy Building, Faculty of Health Sciences.

Swingler is a UCT-trained general paediatrician. Before his return to UCT in 1989 he was a medical officer and specialist in a variety of South African settings. Since then he has worked in community neonatology based at Groote Schuur Hospital and in ambulatory paediatrics at Red Cross Children's Hospital. He was awarded a PhD in 1999 for studies on the clinical usefulness of chest radiography in acute respiratory infections in children. He was promoted to associate professor in 2001, and professor of paediatrics and child health in 2004. He is currently the director of the School of Child and Adolescent Health. He has an interest in evidence-informed practice and his lecture will explore the contributions and limitations of experience, inference and evidence in providing clinical care. Contact the Centre for Extra-Mural Studies for further information on or

Tucan Tucan, a world-music band composed of students and graduates from the UCT College of Music, will be performing at Manenberg Jazz CafÃ© at the V&A Waterfront on Friday, August 18, and Saturday, August 19, from 21h30. The band will then head to Johannesburg for their debut appearance at the International Jazz Festival where they will perform on August 25 on the Mbira Stage.