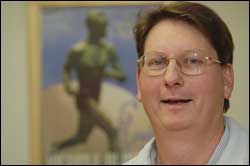 Moving up: Assoc Prof Martin Schwellnus has been elected as second vice-president of the International Federation of Sports Medicine.

Associate Professor Martin Schwellnus has been voted in as second vice-president of the International Federation of Sports Medicine (FIMS), one step up from his previous position as third VP.

It's but the latest in a series of hats Schwellnus has worn since first, in 1992, joining the 80-year-old federation, whose mission is to promote sports medicine and physical activity around the globe.

Initially Schwellnus, of the MRC/UCT Research Unit for Exercise Science and Sports Medicine (ESSM) at UCT, served on FIMS' education commission. This was just after he had started up UCT's postgraduate programme in sports medicine, the first in the country.

Graduates from the programme now hold senior positions in South Africa and beyond. Schwellnus is also founder editor, and now editor-in-chief, of the federation's electronic publication, the International SportMed Journal (ISPJ). In addition, he's overseen the release of two team physician training manuals, essentially a how-to guide to sports-medicine doctors in developing areas.

In 1998, Schwellnus was elected to the FIMS executive committee, representing Africa, and in 2002 as third vice-president, one of the body's four vice-presidents. This year he was named second vice-president at the federation's congress in Beijing in June.

It's going to be business as usual, though, as Schwellnus plans to keep up FIMS' goal to promote sports medicine. But particularly, he wants to pay attention to those nations closer to home. "One of my main ambitions is to promote sports medicine more and more in Africa," he says. That means closer ties to member association, the African Union of Sports Medicine (UAMS). That should be a breeze for Schwellnus - he's vice-president of that body as well.