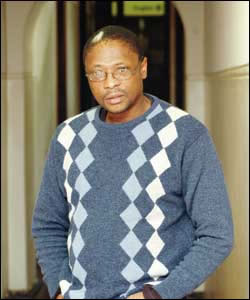 Honours: Dr Sam Raditlhalo pays tribute to his mentor, Professor Es'kia Mphahlele, with a new book on "the Dean of African Letters".

Professor Es'kia Mphahlele is probably the closest thing to a household name South African academia can boast of. (His apostrophised name is a brand all on its own.)

The writer, activist, scholar (possibly the first in the country to embrace post-colonialism) and philosopher - he's the father of African Humanism - is widely acclaimed as a doyen of African literature and scholarship. His 1959 autobiography, Down Second Avenue, is a South African classic. Over the past 50 years he has rightly been showered with praises and honours. One of the more recent, the independent Es'kia Institute, dedicated to the study of African arts, culture, education and literature, finds its inspiration in his works.

For those not familiar with Mphahlele, though, Es'kia: May you grow as big as an elephant and dwarf the rhinoceros is as good an introduction as you could wish for. Edited by Dr Sam Raditlhalo of UCT's Department of English Literature and Language and Professor Taban lo Liyong of the University of Juba, Sudan, the soon-to-be-released book is part festschrift, part scholarly overview.

The new book is divided into nine clear categories, spanning well-wishes to praises, South African tributes and testimonies to international tributes and testimonies, as well as academic and philosophical responses to Mphahlele's work. There's even a chapter by the 87-year-old Mphahlele's wife, Rebecca, on the 52 years she's been with her husband.

The volume is a culmination of two conferences on Mphahlele that were held in 1999 and 2001.

Two other titles, Es'kia, (2002) and Es'kia Continued (2004), complete the local scholarly renascence on Mphahlele. Raditlhalo, together with Harry Garuba, served on both editorial boards.

"He is the Dean of African Letters," says Raditlhalo, who studied under Mphahlele as a graduate student at Wits University in the early 1990s. "The mapping of African literature would not have happened in the manner that it did were it not for him."

Es'kia: Elephant will soon be released by Stainbank & Associates (Rivonia).