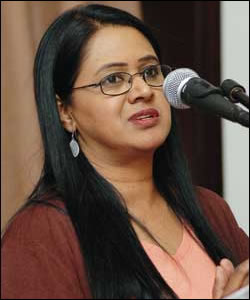 From administrators to managers, student affairs practitioners have a lot on their plate.

After all, they're responsible for just about every aspect of a student's life outside the classroom. At UCT they don't think the job is done until they are able to say their farewells to a holistic, skilled graduate ready and willing to contribute to wider society as a responsible citizen.

But, would you believe it, there are few formal yardsticks for how student affairs departments at South African universities go about their tasks. That's an oversight Moonira Khan, executive director of the Department of Student Affairs at UCT has wanted to set right since she first started at UCT in March 2005.

The UCT convened Western Cape Regional Student Affairs Conference hosted at the Commodore Hotel by Khan and her department on May 11 and 12, was the first step in that direction. Here delegates - including vice-chancellors and deputy vice-chancellors, rectors and deputy rectors, SRC, and some of the senior managers - from UCT, the Cape Peninsula University of Technology, the University of Stellenbosch, the University of the Western Cape and other bodies gathered to speak about the professionalisation of student affairs in individual institutions, the region and, in time, beyond.

Everybody was taken with the initiative. So much so that the four institutions have agreed to set up the Western Cape Student Affairs Forum (WCSAF), a new gathering place where practitioners will share ideas and stories of successes and shortcomings - and thrash out peer-review approaches to promote standards of practice.

"We're talking about a vibrant platform where we can reflect, share ideas and discuss those things we want to improve," says Khan. "We also want to talk about resources and see how to best use those resources in the region, especially in terms of a shared student affairs regional platform that enhances sound knowledge foundations, competencies and experiences."

A steering committee comprised of Khan and her counterparts at CPUT, Stellenbosch and UWC will get the ball rolling on the forum soon. The committee won't be dragging its feet if Khan has anything to do with it. Organisers hope to gather for the first forum as early as August.