Ten years of internationalisation at UCT 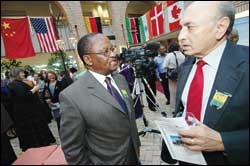 The Atlantic connection: Vice-Chancellor and Principal, Prof Njabulo S Ndebele, hangs out with Moosa Valli, consul-general of the US.

The International Academics Programmes Office (IAPO) turns 10 this year. At a swanky bash at the end of March, past and present IAPO staff, along with university executives, students, red-carpet guests (including a handful of ambassadors and consuls and representatives from partner universities) and others kicked off the office's 10th anniversary celebrations. And as Dr Loveness Kaunda, director of IAPO, pointed out, the office and UCT's internationalisation has come a long way since its modest beginnings. These days, UCT boasts about 4 000 international students on its campuses, which makes up a whopping 20% of all students at UCT. Thanks to the work done by IAPO, the university has exchange and other agreements with pedigreed institutions across the globe. And it has not forgotten its role in Africa, said Kaunda. "Through special partnerships, such as the University Science, Humanities and Engineering Partnerships in Africa (USHEPiA) programme, UCT has contributed to the intellectual and institutional capacities of some eight participating universities in southern and east African countries." Both Kaunda and Professor Thandabantu Nhlapo, deputy vice-chancellor for internationalisation and student affairs, also talked briefly about UCT's internationalisation policy, currently in the works. This policy is set to "contextualise and direct continued internationalisation" at the university. At the March function, the university also paid tribute to the three individuals who got the IAPO ball rolling. Certificates of Appreciation were awarded to former director of internationalisation, Lesley Shackleton; head of office, Caz Thomas; and DVC Professor Martin West, formerly in charge of internationalisation.