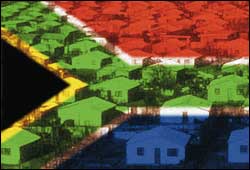 African cities are beset by many troubles - housing shortages, a backlog in engineering (think electricity) and community infrastructure, poor environments in townships and central cities, and, in general, an aging infrastructure creaking under the pressure.

Now a new taught master's programme at UCT, Urban Infrastructure Design and Management, hopes to give those in government and the private sector who have to tackle these ills some of the theoretical tools to do so. Offered jointly by the Department of Civil Engineering, the School of Architecture, Planning and Geomatics, and the Department of Environmental and Geographical Science (ENGEO), the multi-disciplinary programme falls within the ambit of UCT's Cities in Africa initiative.

Cities in Africa is a plan to establish, in collaboration with other institutions, a centre that will inform and influence decision-makers in the private and public sectors on the problems experienced by African cities.

The new degree springs from an initial course in urban engineering offered by the Department of Civil Engineering. But, says the department's Associate Professor Romano Del Mistro, it soon became clear that the disciplinary net had to be cast a little wider.

"We always felt that we needed a broader-based programme. This is not just about the engineering stuff, because engineering happens in a context, a social and economic context."

The programme will call on some of the world's leading academics and practitioners in this area, tapping into a new fellowship programme funded by the Ove Arup Foundation.