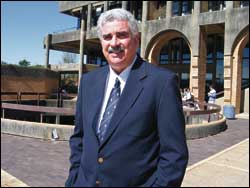 "Tilling the soil" is how Dr Jim McNamara describes his new role as executive director of the Development and Alumni Affairs Department (DAD).

"We till the soil, lay the groundwork for the fundraiser in chief, the vice-chancellor," he said, emphasising the supportive role he and his department will play.

It's a portfolio that straddles fundraising and building alumni relations, both vital to the university's coffers and transformation programme in the face of dwindling state funding and increasing competition for resources.

In many ways the position is a homecoming for the PhD in religious studies from the University of California, Santa Barbara, and former deputy registrar and project director of ISIS (Integrated Student Information System).

McNamara was the equivalent of deputy director of alumni affairs for 10 years at the University of California, Santa Barbara. That was before he took up an invitation to "come and see" Cape Town, extended by friend and colleague Professor David Chidester (religious studies).

He liked what he saw. In 1991 he accepted a two-year visiting lectureship in the department. His wife, Marilynn, now a UCT Libraries staff member, made the journey with him along with their two dogs.

McNamara was attracted by the energy of a country undergoing a U-turn. Caught up in the euphoria of the Madiba Magic that secured South Africa so much goodwill for much of the 1990s, there were many clamouring to invest in the country's rebirth. That's all and well, says McNamara, "but now it's time to build beyond that."

Building is what he does best. With 15 years at UCT he has tackled several portfolios with development at their heart: he was director of student housing and in the past seven years has become the familiar face of graduation to many. But he won't miss steamy Jameson Hall during summer grad.

McNamara views his post as "an extraordinarily exciting opportunity ... at a critical time".

A few weeks shy of his May 1 start, he already has a map drawn and ready, a six-month plan to get to grips with the department and its needs and purposes, reflective of the university's own: equity, transformation and development.

"Adequate resourcing for UCT is, quite simply, an essential precondition for our ability to achieve our goals in these areas, and given the realities of limits on state subsidies and fee increases, a broad and sustained fundraising programme will be a key element in securing these resources," he explains.

South African universities don't enjoy the culture of individual financial giving that our overseas counterparts do. The reasons are varied and tied to our complex history. But clearly, building meaningful relations with our alumni, who McNamara describes as "its institutional memory and guardians of its history", will play a growing role.

"The classic fundraising 'pyramid' ideally has a very broad base of alumni and friends to build and grow upon. To achieve this, a proactive, diverse and creative programme of alumni affairs activities is absolutely essential.

"Such a programme can never be a 'one size fits all' operation and we must be sensitive to the varying histories and material conditions of our vast range of alumni - the experiences of our black medical graduates from the apartheid era, for example.

"We must craft a set of programmes and communication pathways that provide spaces for all of them to participate in UCT's future."

He likes to think of it as offering an opportunity to remain involved with UCT, more than asking for donations.

"The true mark of a mature and successful alumni relations programme is that alumni of any age can find within it an activity or an interest area to suit them, even if this does not necessarily result immediately in a financial donation."

McNamara will also work closely with staff at the UCT Fund Inc in New York and the UCT Foundation in Canada as well as the UCT Trust in the UK, all important players. And apart from the alumni and fundraising aspects, there are people and operations to see to.

Described as a people person and a good listener, his chief regret is leaving a team he's worked with for seven years.

Beyond the university is a man who enjoys reading, his tastes leaning towards his academic field (currently a book on the Dalai Lama). And he is partial to the South African wine lands where he enjoys "research and quality control".