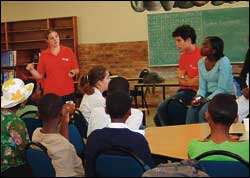 Walk the talk: TDL volunteer, Emma Webber, leads discussion with learners at Luhlasa High School, Khayelitsha, after a model debate on the merits of legalising marijuana.

The Township Debating League (TDL), the official outreach programme of the UCT Debating Union, organised the events concurrently at the Guguletu Comprehensive and Luhlasa High schools to demonstrate the art of debating.

The model debates marked the launch of the league's programme for 2006.

"The launch involved both experienced UCT debaters and TDL volunteers displaying their argumentative prowess in a model debate designed to introduce prospective participants to World School Style debating and to the programme as a whole," TDL's William Atwell said.

The debate was followed by in-depth discussions between the volunteers and participants concerning the day's topic ("This house would legalise marijuana").

The launch was followed by a social function, where new volunteers could meet experienced trainers and the 2006 committee members.

TDL began as a UCT Debating Union outreach programme in 2003 to provide training in communities that previously lacked opportunities in this sphere.

TDL currently has about 45 dedicated volunteers who train debaters in 16 schools in Guguletu, Nyanga and Phillipi. About 500 learners are currently participating in the programme.

Groups of volunteers go out once a week to meet with participants and to hold workshops, ultimately preparing them for one of the many TDL tournaments that are held throughout the year.

TDL seeks to cultivate critical thinking skills, current affairs awareness and communication skills in the participants whose ages range from seven to 18.

TDL believes that these life skills are particularly relevant in South Africa's new democracy. "As far as we are aware, the league is the only programme of its kind in South Africa," said Atwell.

TDL has met with a number of remarkable success stories, of participants who have, over a number of years, risen through the ranks to offer serious competition to debaters from schools with more established debating infrastructures.

This has even been reflected on a national level with learners from TDL schools often beating their privileged counterparts in head-to-head competition at the National Schools Debating Championships. A number of these talented learners have subsequently been admitted to UCT and now form part of the training team.

There is much work to be done, however, as both trainers and participants prepare for the first tournament of the year, hosted at Guguletu Comprehensive on March 25. It is hoped that the competition will produce a new crop of top quality debaters that will go on to compete at a national level.