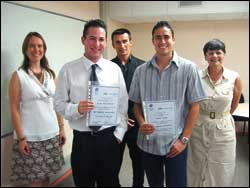 Stats awards for duo:Gareth Goodleser (left front) and Martin Bongers (right front) have won awards in the South African Statistical Association's Student Project Competition, sponsored by the South African Statistical Institute. Bongers won first prize in the honours category. He is currently a master's student in the department, supervised by Professor Linda Haines (right back), who recently joined UCT from the University of KwaZulu/Natal. In joint third position was Goodleser, who graduated with a BSc in statistics from UCT in 2002 and obtained his BSc honours in actuarial science in 2004. The awards were presented by the institute's Goran Drogosavac (left back), national product manager, Analytical Intelligence. The competition received 13 projects from four universities.

This is your opportunity to nominate excellent teachers for the annual Distinguished Teacher Awards: 2006. All members of staff who teach students are eligible for the award, which carries a purse of

The Distinguished Teacher Award Selection Committee would like to draw attention to the fact that outstanding "junior" lecturers can be considered for nominations provided they have taught for a minimum of three years.

The award acknowledges the primary place of teaching and learning in the university's work. Winners are formally recognised at the appropriate graduation ceremonies in December.

The committee may recommend a maximum of four recipients. Recognition in the form of a Vice-Chancellor's Medal will be awarded to a nominee who clearly stands out above the other nominees. Certificates of Teaching Merit will be awarded to those who have not been awarded a DTA but who nevertheless deserve to be recognised for their outstanding contribution to teaching.

Nominations should reach the Senate Officer, Room 110, Bremner Building, by Thursday, April 20, marked confidential and for the attention of Ms D Wedel.

It's the time of year when young mathematicians are called to pit their wits in the annual UCT Maths Competition, scheduled for April 24. All the city's high schools are invited to take part.

Each school may enter five individuals and five pairs from each of grades 8 to 12. Contestants write a 30-question multiple choice problem paper appropriate to their grades. The results are sent to the schools and the prize-giving will be held on