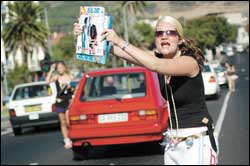 Sassy selling: There they were, in the fast lanes, on the pavements, hopping intersections and haranguing slow motorists. Taxi drivers? Actually, UCT students, in their bling-bling selling Sax Appeal, sub-titled Your Guide to Successful Living, in which they variously insult the leaders of Zimbabwe and Turkmenistan, make fun of Tin-Tin (blistering barnacles!) and provide dubious etiquette for the workplace. Julie Atmore flashed her bling to get rush-hour drivers to part with R15 for a copy. All for a good cause, of course, the main beneficiaries being the communities served by SHAWCO.

It's been a hot and windy welcome to the new academic year, heralded a little earlier by the scantily clad bling-bling-adorned first-years selling Sax Appeal.

This annual fundraising drive for SHAWCO, which has upliftment projects across the Cape Peninsula, was good timing, coming a day after an upbeat budget speech in parliament.

In the preceding weeks, Vice-Chancellor and Principal Professor Njabulo S Ndebele welcomed parents visiting the university for a parents' information day. They got a taste of student life when they were ferried to upper campus aboard the Jammie Shuttle.

Also in January, with the young set on holiday, senior students tricked steadily on to campus for UCT's evergreen Summer School. This year just under people enrolled with audiences of over 300 at many lectures.

Our first edition of Monday Paper is equally upbeat.

Ndebele was invited to attend the recent World Economic Forum meeting in Davos, Switzerland, along with representatives of 24 other top universities from around the world. He reported back his impressions at the first PASS forum meeting on February 9.

Meet the affable new head of medicine, Professor Bongani Mayosi. There's also plenty of news on our new deans following the appointments of Professors Kathy Driver (science) and Marian Jacobs (health sciences) and Professor Hugh Corder, whose contract as Dean of Law has been extended for another term.

And importantly, we pay tribute to those stalwarts who keep the wheels turning on campus while the majority of us are off enjoying some well-earned rest and relaxation. Among those hard at work at UCT while others were on holiday were the admissions team, who had to process some applications, staff who worked late into the night on January 30 to finalise a US$2.5 million proposal to the Carnegie Corporation and staff responsible for making sure the new Integrated Student Information System (ISIS) was up and running in time for registration.