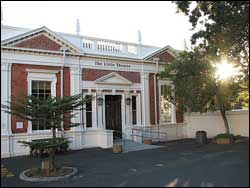 When the university moved from Orange Street in the city to Rondebosch, music professor W H Bell saw the potential of Daantjie Hahn's old chemistry laboratory, just outside the Lioness Gates off Government Avenue, and persuaded the university Council to let him have it for use as an experimental theatre.

And so the Little Theatre was born, according to Donald Inskip's book Forty Little Years.

Located today on the Hiddingh campus, the Little Theatre celebrates its 75th anniversary this year.

The clock will be turned back on March 15, 2006, when The Seagull, directed by alumnus and senior lecturer, Liz Mills, opens to officially kick off the celebrations.

A comprehensive line-up of performances showcasing the school's talents has been organised to run throughout the year.

These include Die Swerfjare van Poppie Nongena by Elsa Joubert and directed by Sandra Temmingh, to play in the Arena theatre from March 10 to 25.

Kusalawula Yena, an adaptation of the novel by G B S Xundu, and directed by staff member Thoko Ntshinga, will run in the Little Theatre from April 10 to 29, including several matinee performances aimed at schools.

This production is timely as bilingual courses in Xhosa/English and Xhosa/Afrikaans are to be introduced for the first time in the drama school curriculum this year.

In recognition of the department's teaching excellence and impressive productions, the drama school has received several invitations to participate in international events.

In April, Christopher Weare directs a production of local playwright Robin Levetan's Mrs Kaplan and the Witchdoctor, with senior theatre students, at the International Theatre Schools Festival, Setkani/Encounter in Brno, Czech Republic, before moving on to Bucharest, Romania, for four performances.

Together with Morocco, the department has been invited to represent Africa at a three-week theatre conference in the Philippines in May.

There is also a trip to the Netherlands where students will participate in a two-month theatre exploration with an international body of theatre makers.

The Little Theatre has remained an integral part of the university, serving mainly the drama, opera and ballet departments. In addition, it has claimed its rightful place as an important part of Cape Town's cultural life, as a venue for community and professional performances alike.

The writing is on the wall, literally. Evidence of the diversity of activity that has happened in the Little Theatre can be found in the inscriptions, the graffiti, so carefully protected after all these years.

Professor Bell must be pleased.