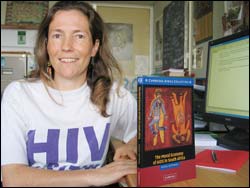 Interface: Prof Nicoli Nattrass has won the 2005 UCT Book Award for her work The Moral Economy of AIDS in South Africa.

HIV Positive is the message on Professor Nicoli Nattrass's T-shirt. There are signs pointing to AIDS activism everywhere in her office. And she is gratified that her endeavours in this area have been recognised along with her academic work on AIDS by the 2005 UCT Book Award, presented for her work The Moral Economy of AIDS in South Africa.

Published last year, the book has won wide acclaim from many circles, presenting as it does the interface between the moral and economic facets of AIDS in this country.

In his citation, nominator Professor Anthony Black, director of the School of Economics, writes: "As we know only too well, the struggle against AIDS in South Africa has been hindered by obfuscation and political wrangling, to the detriment of those affected by the disease. So it has been particularly timely to have a book which powerfully makes the ethical and economic case for expanded AIDS prevention and treatment measures. It does this in a manner that is both rigorous and engaging."

Black praises Nattrass's meticulous research and good writing on a topic that addresses one of the country's most pressing issues. "It is indeed a classic example of the kind of work that engaged intellectuals at UCT ought to be doing."

One reviewer was struck by the combination of the book's moral argument and economic theory.

"This is in my view a profoundly impressive work, one written with appropriate passion and argued with intellectual command. Prof Nattrass has strikingly mastered not only the economic theory that is necessary to her argument, more tellingly, she has mastered current debates in medical ethics and distributive justice, and the complexities of AIDS epidemiology and physiology, and has marshalled her material into a compellingly readable, thought-provoking, and at times, moving whole.

"It reflects enormous credit not only on the institution with which Prof Nattrass happens to be associated, but on all who are committed to intellectual and academic endeavour on our continent."

Nattrass, who heads the AIDS and Society Research Unit (commerce faculty) in the Centre for Social Science Research, is hopeful that the award will boost this kind of academic output in her resident faculty.